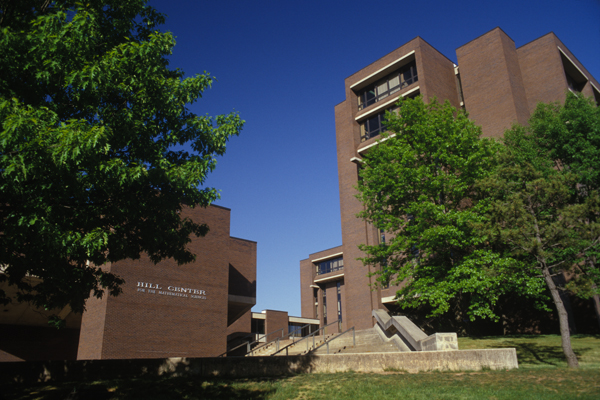 The Mathematics Graduate Program at Rutgers is housed in the Hill Center for the Mathematical Sciences, a seven-story building on the Busch Campus in Piscataway Township, New Jersey. It is close to the Engineering and Physics buildings. Hill Center and the adjoining CoRE building also contain the Departments of Computer Science and Statistics, and the Center for Discrete Mathematics and Theoretical Computer Science (DIMACS). Office space is provided to all full-time graduate students in mathematics. On the seventh floor is a lounge area, where coffee and tea are served to faculty and students of the department each afternoon while classes are in session. The seventh floor probably has the most spectacular views of any location at Rutgers: see Manhattan on a clear day! There is also a smaller informal room (Hill 701) set aside as a gathering place for graduate students.

The third floor of Hill Center contains most staff and administrative offices for mathematics, as well as the mail room and copy room.

The "Hill" of Hill Center commemorates George William Hill (1838-1904). He was a Rutgers graduate who studied the motion (especially the precession) of Venus, Jupiter, Saturn and the moon. His analysis was modeled on what we now call Hill's equation, which is the ordinary differential equation    y'' = p(t) y.   G.W. Hill was also the first president of the American Mathematical Society (1894-96). If you liked these facts, you may want to find out more about the history of Rutgers' mathematics department.

The Department of Mathematics in New Brunswick has a variety of networked computing resources available for both general and research purposes, with a full-time staff dedicated to systems and user support. The network is primarily a Sun-based UNIX system, although the staff's PCs use Windows and Linux. Three Sun server clusters with a total of 10 machines are dedicated to support of research and education. The primary users are faculty, staff, graduate students, and departmental visitors. Most computer needs of undergraduates are met by various large university systems. There are approximately 200 workstations, ranging from X-terminals to Sparcs and Ultras, with network printers, scanners, and PC's located throughout the building, both in offices and general access computer labs. The department also provides dialup access for faculty, staff, and graduate students. Common languages such as Java, C, C++, Perl, Fortran, Pascal, and Lisp are available, as are document preparation tools such as TeX and packages such as Maple, Matlab, and Mathematica. Our computers are networked via 10/100 MBps Ethernet, so members of the department have access to all Rutgers computing services and to the Internet.

The Mathematical Sciences Library is located in Hill Center. It has an extensive and specialized collection containing more than 36,000 monographs, with about 700 current journal subscriptions and more than 23,000 bound journals. Electronic access to all of the university library system and to other libraries is possible using terminals in the library and via the Internet. The university holds more than three million volumes, and is among the top 25 research libraries nationally. The university also has electronic access to a wide variety of journals and preprint servers.

Rutgers is a university partially funded by the State of New Jersey, with substantial additional contributions from students (tuition) and other sources (such as research grants from the U.S. government). Rutgers has facilities in many parts of the state, but most graduate programs are located in and around New Brunswick, New Jersey. New Brunswick is located in the center of New Jersey. It is approximately 50 km (30 miles) south of New York City. It is about 30 km (20 miles) north of Princeton (home of Princeton University and the Institute for Advanced Study), and 100 km (60 miles) north of Philadelphia. New York City, Philadelphia, and Princeton are accessible by public transportation (frequent bus and train connections are available). Automobiles can also be used, but driving can be difficult at peak traffic periods, and they do pollute the air.

New Brunswick is in an urban "corridor" stretching between two large metropolitan areas: New York and Philadelphia. Much of New Jersey is quite densely populated. Thus it is interesting that some of the nicest ocean beaches in the world are 45 minutes from campus, and some truly marvelous mountains, hiking trails and campgrounds are about an hour away (in the other direction).

New Brunswick originated as a ferry crossing on the Raritan River. The river is still a central part of university life, because Rutgers has four campuses in and around New Brunswick, two on each side of the Raritan. Although Rutgers was founded in 1766, the oldest extant part of Rutgers University (dating from 1810) is the College Avenue Campus in downtown New Brunswick. On the southern outskirts of New Brunswick is the Cook/Douglass campus, which has lovely display gardens dating from 1864, when Rutgers was designated the state's agricultural university. The Livingston and Busch campuses are across the Raritan river in Piscataway. The Busch campus is primarily dedicated to science and engineering, and is adjacent to the Robert Wood Johnson Medical School. Historical note: Piscataway was founded in 1666, substantially before New Brunswick (1681), Rutgers (1766) or the United States (1776). The name "Piscataway" may come from a phrase in the American Indian Lenape language, meaning "It is getting dark."

Almost all graduate mathematics classes and seminars are in Hill Center. Also, the Mathematical Sciences Library is in Hill Center. However, graduate students will likely need to visit other campuses. For example, undergraduate instruction in mathematics takes place on all four campuses (so Teaching Assistants will almost surely travel). English as a Second Language (ESL) is on Livingston and the International Center is on the College Avenue Campus. Some university housing is located on other campuses. There is a free intercampus bus system which works reasonably well. The distances between campuses are approximately 1.5 to 2.5 km (1 to 1.5 miles) and can be walked or biked, but not comfortably in certain weather conditions. Parking a car can be difficult.

Seasons vary in New Jersey. Here are facts for New Brunswick, from The New Jersey Weather Book published some years ago (and now out of print!) by the Rutgers University Press:

The temperatures in this table are 24 hour, monthly means. Daily extremes can vary considerably from these means. Temperature in a typical year can range from -15 to 35 °C (5 to 95 °F).

Summers are often hazy, hot, and humid, and may be uncomfortable to many people much of the time. Most office buildings have air conditioning, which reduces both air temperature and moisture content. Winters are not arctic, but can be chilly. The precipitation column is liquid equivalent depth. Please realize that snow is much fluffier than water, so there can be substantial snow accumulations. Much more common in the winter, however, are ice and slush. Fall and spring are usually comfortable transitional seasons. Note that it is rarely dry here for long: rain is common. Further information is available.